MD5 Reverse Encryption? We Have You Covered

Do you have MD5 files that you need reversed? No problem. We’re specialists in MD5 reverse encryption. We get your MD5 files reversed back into a decipherable format.

MD5 hashes were developed alongside the emergence of CAN-SPAM regulations and litigations. This method of encryption was created for privacy and transference of sensitive information online. The use of MD5 hashes expanded over the years. Now, this algorithm is used to keep credit cards, phone numbers, web addresses and other sensitive information private over the web.

However, what happens when you need to reverse the MD5 encryption? What if your need MD5 emails appended? How about when you have an extremely large file of thousands of MD5 hash codes that you need decoded? These codes aren’t supposed to be fissured. In fact, they’re designed to be impenetrable and irreversible.  Don’t sweat it, though, we have cracked the code. 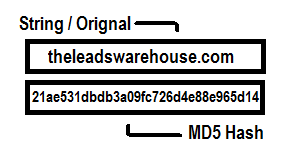 Don’t waste your time with online MD5 hash lookups. These only allow you to look up one code at a time. They’re time consuming and often produce incorrect outputs. This sucks up your time, energy, and ultimately, leaves you frustrated.

Why Would I Need MD5 Hashes?

The algorithm for MD5 codes was created in 1991. It was developed as a security measure for sensitive information online. It also had the supplementary advantage of convenience. There’s a myriad of different practical applications for MD5’s. Check out the following examples:

Why Would I Need MD5 Reverse Encryption?

Due to the nature of MD5 hash computation, reversing the encryption is problematic. These codes were developed to be impermeable. In essence, a code could not be decoded back into the original input. So, if you misplaced your file of emails? Traditionally, you would be out of luck. If your file of passwords was corrupted? Again, you’d be without a solution. If your list of client phone numbers vanished? Your MD5 encrypted file would be of no assistance.

The aforesaid scenarios result in the need for MD5 reverse encryption. Essentially, you could recover those emails, phone numbers, or passwords. This has been frustratingly impossible. So, The Leads Warehouse developed a solution.

We use complex mathematical derivations. We also utilize existing online comparison dictionaries. We delve into our own MD5 database. We combine the efforts from all 3 to offer our clients MD5 reverse encryption.

We recover all of your MD5 hashed emails. The Leads Warehouse respects your security preferences. We expressly ensure that your files are kept private. Your decoded files are returned to you promptly after MD5 email appending.

We empathize with your budget. That’s why our MD5 reverse encryption is offered at:

Let us get your MD5 files looked up and converted to their original format. If you’re interested in using our MD5 email append service, please fill out the form on the right, or give us a call now for a completely Free quote!

Your Information is Secure and Confidential
Our thoughts go out to those affected by COVID-19. We ARE open and following standard business hours. Call us at 1-800-209-4802